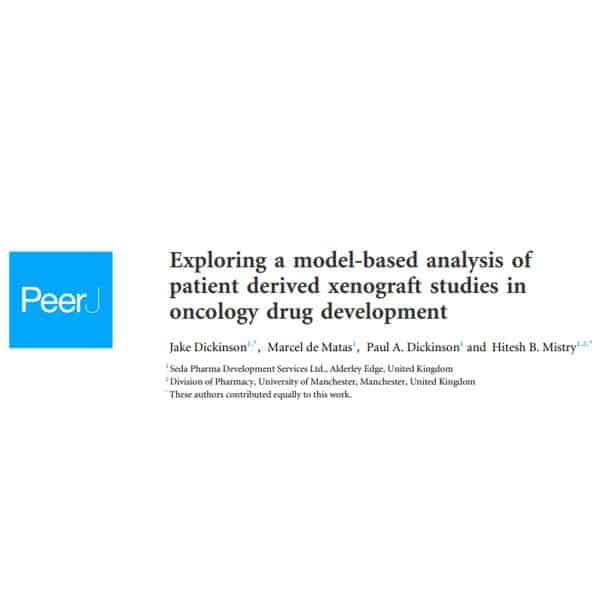 New paper “Exploring a model-based analysis of patient derived xenograft studies in oncology drug development” just published in PeerJ. Seda authors Jake Dickinson, Marcel de Matas and Paul Dickinson in collaboration with Seda Associate Hitesh Mistry applied their modelling wizardry to explore the design of patient derived xenograft (PDX) experiments. They concluded that a model-based analysis of xenograft data improves statistical power over the common empirical approach, meaning that future studies could be shorter in duration or use fewer animals without compromising data quality – great from a 3Rs perspective (reduction, refinement and replacement of animal usage in preclinical studies). This is particularly valuable for patient derived xenografts (PDX), which are known to have higher variance than the standard cell-line xenograft and are becoming more popular within preclinical development.

Xenograft studies are used extensively in preclinical oncology drug development to assess the anti-tumour effect of new compounds. The xenograft study starts by grafting a human cell-culture into the flank of an immunocompromised mouse. Digital callipers are used to measure the tumour dimensions to calculate tumour volume at regular time intervals. Once the grafted tumour has reached a certain volume, each mouse is randomised into a treatment arm or the control arm (untreated). The difference in mean tumour volumes between the treated and control group at the end of the study, typically referred to as the Tumour Growth Inhibition (TGI) value indicates the treatment effect. Additionally an un-paired, two-tailed t-test is performed to assess whether the volumes at the end of the study are significantly different.  In this paper, the authors demonstrated the increase in power obtained by using a model-based mixed-effects regression analysis and a naïve pooled approach over the typical un-paired, two-tailed t-test analysis of final volumes. The key advantage is that all data points in the time series are used. This avoids the introduction of bias due to mice dropping out at a time-point before the TGI value is calculated. This is common in the control arm due to the volume exceeding a pre-defined animal welfare limit. Thus, performing an un-paired, two-tailed t-test on the final day of the study, may result in an under-prediction of the mean control volume and hence the efficacy of the treatment is underestimated.